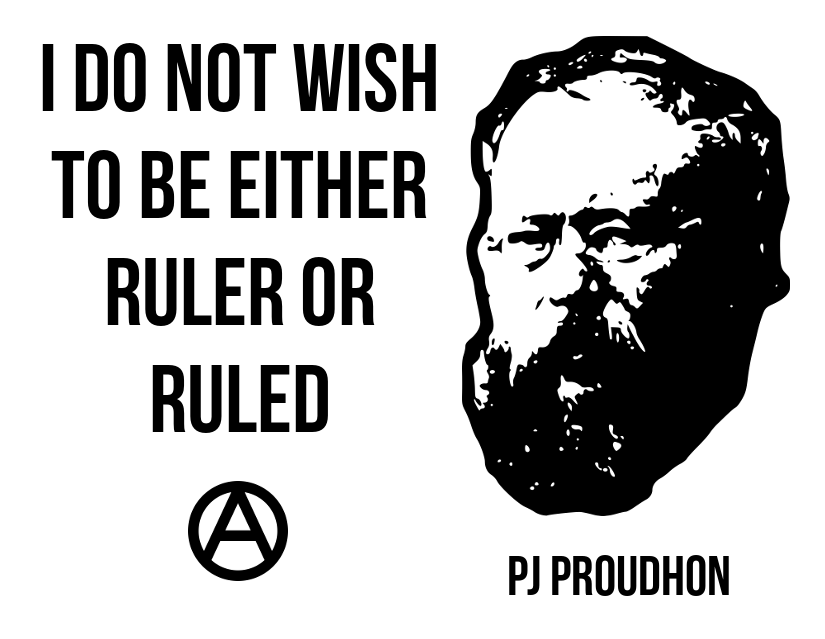 I have agreed with this sentiment for as long as I can remember, at least stretching back to age 10 or 12 and long before I had ever heard of the likes of Proudhon. I don’t believe that Proudhon is a big focus in the United States. I never encountered him in all of my studies from kindergarten to grad school—and I was an economics major.

In the US, disparaging Marx was always in vogue, with the off-hand remark along the lines of “Communism works on paper, but because of human nature, it can’t work in practice. And by the way, look at the Soviet Union. That’s all the proof you need.” Of course, I was left thinking that at least it worked on paper, something I can’t say with a straight face for Democracy.

For those who are familiar with Proudhon, he is likely remembered for his quote, “Property is theft!” I’ve discussed this before.

But this is a different quote: “I do not wish to be either ruler or ruled.” When I was in high school, there was a saying, lead, follow, or get out of the way. As imperfect of a metaphor as it is, I just wanted out of the way. In the world of leaders and followers, I wanted to be an advisor. In a manner—given the false dichotomy of followers and leaders—, this relegated me a de facto follower. Only I am not a follower. I not only question authority and authority figures, I question the legitimacy of their power. Not a great follower, to be sure.

I feel I am the peasant in Monty Python’s Holy Grail who tells King Arthur upon encountering him, “Well, I didn’t vote for you.” Not that voting yields some source of legitimacy. What options does one have?

Philosophically speaking, there is no justification for personal bodily autonomy. Someone just made this claim, and some others agreed. Sounds good to me, but there is no real reason to support the idea save for selfish rationale.

The science fiction staple, Star Trek, famously created a Borg where autonomy was futile. Because of our acculturation, we find this idea perhaps silly or perhaps appalling or absurd, but one is not more justifiable than another except by rhetorical devices. Yet neither is right.

In the West, we tend to prefer a rather middle path, and perception doesn’t actually comply with reality. I think that people believe that they are more autonomous than they are. I’d be willing to argue that this is the same delusion underlying a sense of free will. Sartre might have argued that we each retain a sort of nuclear option as a last resort, but a choice between two options is hardly freedom. It sounds a lot like Sophie’s Choice (spoiler alert).

Not so come across like Hobbes, but I do feel that violence (subject to semantic distinction), or at least the potential for it, is inherent in any living system. With political and legal systems, violence just shifts from explicit to implicit, and so out of sight, out of mind.

In any case, I do not wish to be either ruler or ruled. I just want to advise. I’m an introvert. I want to be left alone. I value the benefits of society and I participate at the margins, and that’s where I prefer to remain. If the direction of the train I am on seems to be running off the tracks I’d presume it should be on, then I’ll get vocal. Otherwise, I’ll take the privilege to concentrate on cerebral and philosophical interests.

I’ll advise you to do the same.

Anarchy exists in the world today. It always has. Macroscopically, one needs only step back to see the forest for the trees—or zoom in for microcosms. The only place it’s rare is in the middle.

As far as scaling, political states are anarchy at scale. They hide behind sovereignty and do as they please. United Nations and such try (meagerly) to herd the cats—say, the US—, but the Big Cats still do as they please. So when you hear that anarchy is untenable, remember that it is more prevalent than not.

In the domain of physics, we hear the quaint Aristolenian adage that nature abhors a vacuum, but in fact, it doesn’t. Without engaging in a quantum debate, the universe is more vacuum than not. This belief is a projection centred on human narcissism, viewing itself as the centre of the universe: some humans seem to abhor a vacuum—as do many dogs abhor vacuums, but that’s a horse of a different colour.

And when you hear that anarchy doesn’t scale, remember that it can be seen on both micro and macro scales. The question is: what happens in the middle?

To be fair, there are many small-scale human endeavours where power structures still decimate the ‘natural’ anarchy, but this is imposed—whereby I use the term natural to mean without intervention.